My being in Norway was just like a dream,but now that am in Norway and i have experienced alot of things both good and some bad accoarding to me,but here i will mostly talk about the good things as am to only take the positive ones.The first day i arrived in Norway i experienced totaly different type of weather and as person coming from a hot climate country,it was really strange for me but in the other side it was so fun for me because it was shinning but very winndy,as i was walking around, the streets were so nice and good looking,the roads were so perfect compared to the onces in my country.By all this time i was still in a small town in Norway called Mandal,but time came where i had to leave Mandal for Kristiansand, in the Southern part of Norway,waao!the buildings were so nice more than even the onces i saw in Mandal,you know what dear reader?it came a time where i really felt myself that am outside Africa,and laiter on i came to know that this city was name after some one who was called Kristian and then sand was the city being so sanndy,so it makes Kristiansand,its really amazing!Other things that i like about Nowray are,one of them is about time management,in Norway every thing is done according to time and this inspires me so much because it helps in development and i think it will be be so perfect for me to take it back home,another good thing is about security,in Norway you can walk in town up to midnight and nothing will ever happen to you,comparing this back home,when it is dark it is not safe for you to walk.There are very many things to talk about but today i will end from here,so see you next time
Posted by stellah at 1:23 AM No comments: 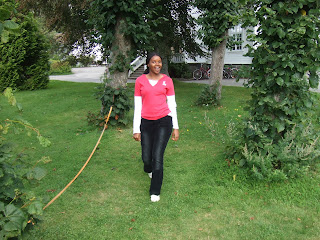